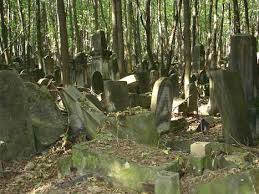 I scribbled this post right after Yom Kippur but then I told myself that all this talk about death was just not too coherent with the happy Sukkot season we were about to enter. Today, when we approach the end of the Tishri frenzy, some shocking and very sad news brought the subject back to my mind: two days ago my graduate-school friend Cantor Jason Goldberg passed away of a sudden heart attack at age 34. May his memory be a blessing.

While leading Yom Kippur services this year, I was meditating on what I call the Kippur reenactment of death. This is a very strange holiday, with ancient and a little obscure rituals. If you think about it, the whole idea of Kippur is to play dead. Many of the details prescribed by the ritual correspond to a metaphoric death: like the deceased, on Yom Kippur we wear a white kittel and no leather shoes. All of our attire is white, the color of purity and that of shrouds. Just like the dead, we don’t eat, drink or have sex, all actions that define the quotidian of living beings. We are, in a way, like the angels of Service, spending the whole day in prayer and praise to Ha-Shem.

It is not by chance that this day is also named yom ha-din, the Day of Judgment, because that is what we actually enact. Think of U-netane Tokef and its words: this day is full of awe and terrible, a time to come in front of the divine presence. The Book is opened and our destiny is now sealed: who will live and who will die, how exactly will the dead perish, who shall prosper and who shall not. A mighty shofar is blasted, but only a still small voice comes out, calling us to teshuvah. At that time of the day, I can’t avoid thinking of those who are aged or sick. I wonder how many will not be here next year for Kippur. It hurts to imagine that Jason may have had a similar thought when he sung that same dirge-like melody some weeks ago, with his limpid tenor voice, for what would be the last time of his life. Death –and even more when it is untimely and sudden– always falls on us with the cold shine of a knife.

One of the strangest aspects of the High Holidays, and particularly of Kippur, is the ritual prostration. Jews do not ordinarily kneel or prostrate when praying but we have this one time when we do. It is a humbling and deeply spiritual experience that –unlike some people think– it is not reserved to clergy. Next year, give it a try and you’ll tell me! I read somewhere that the prostration in itself is another reenactment of death: instead of falling flat at once, we slowly bow down, kneel and move to a full prostration. We are slowly breaking down and dying, falling back to mother earth’s womb. However, we are in front of the King, who has the power to raise the death, so lifne Melekh we suddenly raise back to life, like the earth revives in its cycle of seasons.

I am not an anthropologist, but I wouldn’t be surprised if the origins of prostration are in fact reenactments of death. Bowing down and prostrating to the sun is probably the oldest form of human worship, as if our ancestors where telling the sun: “ we acknowledge that you are very powerful, that you give life to the plants and that you even can burn us to death if left in the desert for some time; see? just one stare from you and we drop dead!” Since the tribal king –as later the pharaoh– was often a personification of the sun, it comes as no surprise that the ancients begun to bow down to him as well. Many ancient religions –and even modern Islam– have fasts that last only as long as there is daylight. Somehow, maybe they “play dead” so that the solar god don’t see them “alive and eating”.

Wherever we look in the Yom Kippur machzor, there are constant reminders of the metaphoric death. There is a Yizkor service, probably the central one in the year. We have a long recitation about Jewish martyrs in history –modernly including those of the Shoah– with very graphic details of their death. A number of times we repeat piyyutim like be-yom din. Finally, there are a number of confessions: remember that the vidui is not only something we recite several times on Yom Kippur but also the prayer we are supposed to say at the time of our death. This text not only permeates the viduim of the Avodah service, but also many other places such as the end of Neilah.

And yet, Yom Kippur is a reenactment of death so that we can enjoy another year of life. No matter how we feel, life goes on. By “playing dead” in a way we try to conjure death once again. At the end of Neilah the mighty shofar blasts loud and clear, a sharp contrast with the shofar described in U-netane Tokef, and we respond with relief and with joy, already making plans to celebrate it in Jerusalem, next year. May we all indeed be there to celebrate.